(after “The Dance” by William Carlos Williams)

In John Dominis’ photo, “Mickey Mantle 1965”,
the great slugger, who has been struggling,
slouches slack-jawed toward the dugout,
another strikeout behind him, and his limp right wrist
has just flung his helmet, which hangs in the air
like a lopsided Frisbee, while the blond hairs
on his right forearm catch the afternoon light,
and maybe bad knees or the bottle have taken their toll,
but there is still something defiant about him,
as Clete Boyer waits on deck with two bats,
and the crowd is silent in the early summer haze,
in John Dominis’ photo, “Mickey Mantle 1965”. 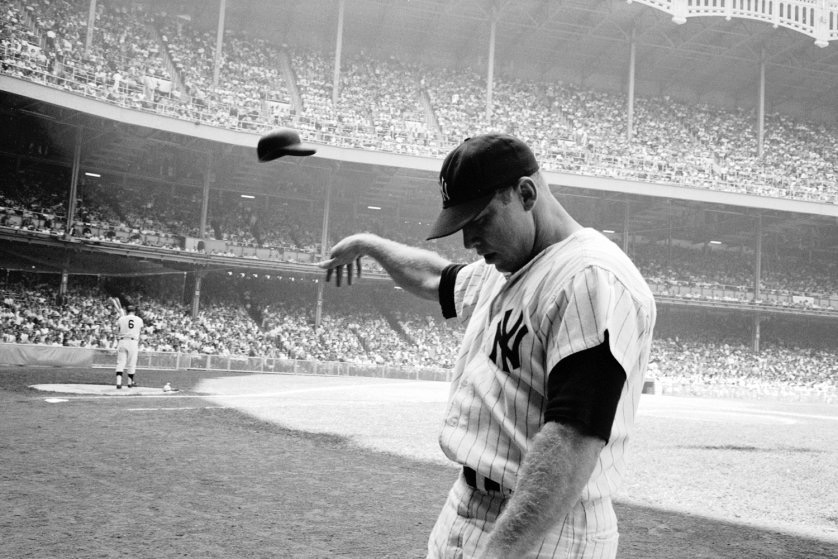 This poem is from the chapbook Hits and Sacrifices, published by Finishing Line Press.

Bruce W. Niedt is a retired civil servant whose poetry has appeared in numerous publications, including Writer’s Digest, Rattle, Tiferet, the Lyric, Spitball, US 1 Worksheets, and the anthologies Best of the Barefoot Muse and Poem Your Heart Out. He has been nominated twice for the Pushcart Prize. His latest chapbook, Hits and Sacrifices, is his second for Finshing Line Press.

Hits and Sacrifices is available from Finishing Line Press: https://www.finishinglinepress.com/product/hits-and-sacrifices-by-bruce-niedt-2/

Spend some time with Bruce Niedt’s baseball poems. Get to know ’em, pick out your favorites. They’ll become as familiar and comforting as the players in that big league lineup from your youth that still shows up in your dreams.

As the first poem in this collection observes, every spring brings with it another receding hairline of snow beckoning us to take our seats in the bleachers. Bruce Niedt fields his team with a cast of characters that encompasses everyone from the steely-eyed closer to the guy hawking ice cream in the stands. Niedt is adept at adapting poetic forms to crystallize every aspect of the game, from the home team slump to the pitch that killed. He weaves the lore, superstitions, and drama of baseball into a big win for those who love the game.

Bruce W. Niedt’s new poetry collection, Hits and Sacrifices, is the next best thing to a live ballgame. As the signal between a pitcher and catcher transmutes to the glance between a guy and girl on the subway home; as an interned Japanese-American boy almost hits “a homer over the barbed wire fence”; as the August moon hangs like “a giant fly ball moving/on an imperceptible upward arc into the evening”- Niedt shows us that to know baseball is to know America. With humor, tenderness, and vivid imagery, Niedt brings us home to the diamond that democratizes us, all – from his groundskeeper, vendors, and fans to Mickey Mantle and Walt Whitman. His legends – of magic mud, the ball that never comes down, the bird clipped midair by a fastball – will surprise, touch, and enchant baseball fans, poetry lovers, and the newly initiated, alike. To borrow Bruce Niedt’s words about a hibernating ballpark: “Everything here echoes.”