crossing a stream that roars and echoes

through a cave, once a shelter for travelers.

The water cuts through generations of stone,

nine generations to be exact since my people

walked this way. My thighs and lungs strain

but I push on, shod in appropriate footwear,

energized by abundant color and surprise along

and patches of wildflowers vary with shade

or sun through the woods. How hard, I think

as I climb, it must have been to head off

into the wilderness, to find the notch between

mountains for admission to a place called

Kentucky. The path wasn’t new and it wasn’t

theirs, but one long worn by others before

we claimed it and made it our own. While I

can’t change the history of loss and taking,

the road conjures those who came before. My

with children who were surely hungry, tired,

and with soiled pants. Was it her idea to make

the journey? Did she believe it was her way

to a better life? Were they cold, barefoot, sick,

me feel modern, fragile, and in awe

of what it took to make it through the gap. 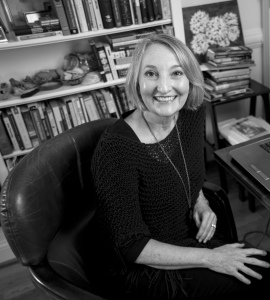 Jayne Moore Waldrop is a Kentucky writer, attorney and former book columnist for the Louisville Courier-Journal. Her work has appeared in Appalachian Heritage, Limestone Journal, New Madrid Journal, Kudzu, Minerva Rising, Deep South Magazine, and other journals. Her stories have been named Judge’s Choice in the 2016 Still Journal Fiction Contest and as finalists in the Reynolds Price Short Fiction Award, the Tillie Olsen Fiction Prize, and the AWP Intro Journals Project. A 2014 graduate of the Murray State University MFA in Creative Writing Program, Waldrop lives in Lexington.