I’ve been shining gems, all my life:

Lowering them in on the ammonia tray,

These were items of principle:

Relatives pierced me with smooth studs

and a Mexican-made Italian Horn of Plenty.

(I wore it under a ripped t-shirt

I am a woman wading

up through the smells, oils, the face-pack apologies

to a visual strangeness:

The stiff men, the ties that choke them.

I held the gloved palms

and saw the room darken at my own unjewelled image in the mirror.

For the talking piece of earth, hands of grain

for the oyster eyes, their pearl-worth,

I robbed my ring fingers.

Each cell heaved, returned to its previous chemistry.

In the forbidden river,

my limbs float upward in a pool of light 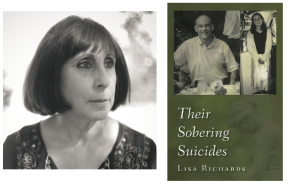 Lisa Richards earned her B.A. in English and Creative Writing from U.C.L.A., and her M.S.W. from U.S.C. She is a Board Certified Diplomat in Clinical Social Work, and has maintained a consulting practice in Southern California for over thirty years. She is published in her field and has presented at numerous conferences. Lisa received an Honorable Mention from the Academy of American Poets. She recently won residencies from Turkey Land Cove Foundation, Hypatia-in-the-Woods, and University of Washington’s Helen Riaboff Whiteley Center. In 2012, Lisa co-authored Dear Mallory: Letters To a Teenage Girl Who Killed Herself (New Middle Press) following the 2011 suicide of her only child. Dear Mallory received an Honorable Mention in the Eric Hoffer Book Awards, and was called “hauntingly candid” by The Journal of the American Academy of Child and Adolescent Psychiatry. Dear Mallory has been added to the recommended reading list of the American Association of Suicidology, and is being used as a suicide prevention tool in schools and psychotherapy offices. Dear Mallory is also a resource for survivors of suicide loss.

She is the author of Their Sobering Suicides (Finishing Line Press) available at amazon.com: https://www.amazon.com/Their-Soberingsuicides-Lisa-Richards/dp/194489988X